You are here: Home / Su bici – your bicycle / Cycling and E-biking on La Palma / EBikes for everyday live

In Northern Europe it is no longer a topic of discussion, electrified bicycles are conquering the city and the country. But maybe after the crisis, more and more people on Isla Bonita are discovering that it is practical, inexpensive and healthy to move on two wheels. And who would have imagined it – it’s also fun!

Some bikers are already on the trails, but in the city and on the country roads there are many previously unused transport options in addition to sporting training. How many times have you been annoyed when looking for a parking space or at a gas station? Doesn’t have to be;) 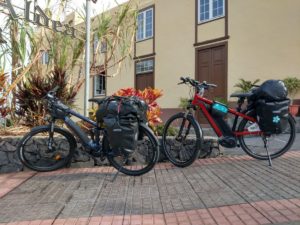 Trekking bikes are anything but unsportsmanlike and also offer the opportunity to “get rid of” something. All of the holiday luggage or small equipment for the weekend can be transported in specially adapted panniers on the stable luggage racks.

Cleverly stowed away and well distributed, thanks to powerful motors, it drives easily, carefree and with an amazing range. At Su Bici there are large panniers for circumnavigating the island, a medium-sized bag for a day tour or a bag for a spare battery and the little black dress for a sporty outing. 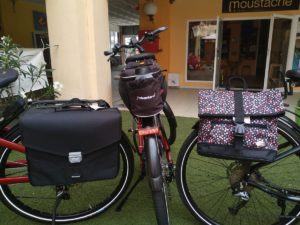 Just to the city for a business appointment, on time, without pizza-sized sweat stains under the arms? As a bonus there is a parking space right in front of the door! And the traffic jam is left nonchalant – traffic jam, what traffic jam?

For this, too, we always have a chic selection of bags on site, whether business suitcases or the fashionable, colorful shopping bag with customized click holders. 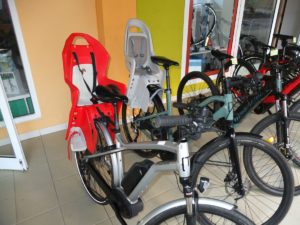 Traveling with the family

The two four-legs above have fun in cargo bike – unfortunately children are not allowed in Spain. That’s where the good old child seat comes from. Our stable trekking bikes master this with ease. Great fun for the whole family or even if dad just takes her little daughter for shopping or mom wants to go to the hardware store with her son.

As a cargo donkey and heavy goods vehicle

The Cargobike is of course the luxury variant of transport on two wheels. Full suspension with all comfort and an impressive payload, it drives like on rails. There is also no weekly shopping, a visit to a hardware store or a garden center.
1000Wh ensure enormous range and powerful engines make even the occasional decent gradients on La Palma seem secondary.

Then why a car or motorcycle?

Because sometimes it’s unbeatably practical and convenient! No, we are not dogmatists, we also drive our beloved small diesel and dirt hurlers. There are distances, payloads and other necessities at which we would never have the idea of ​​using an e-bike or even a biobike or entrusting ourselves to public transport.

BUT (of course always comes with such an introduction;)):

What is nicer than reaching your destination carefree in the fresh air on medium distances with an almost guaranteed year-round good weather?

What fun to cycle to Santa Cruz and not to think about traffic jams or parking! 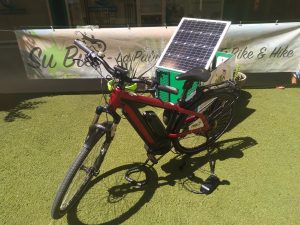 Well, occasionally, but we charge our bike either with our own solar power or – if absolutely necessary – with the unbeatably cheap 13 cents / kwh from the emissions-related e-plant at the port. You can request building instructions for Carola (carrito solar) from us. In any case, the cost of a charge is almost zero. However, we do not want to hide the fact that a new battery is due every few years, it will cost a bit. 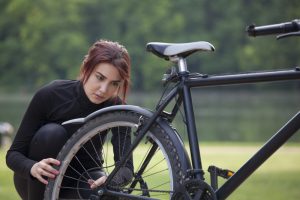 Of course, even a scooter is a technical device and occasionally needs skilled maintenance if it is to have a long life. An e-bike is a completely normal bicycle, the ongoing maintenance of which can be done by every skilled home and craftsman, especially by a bicycle screwdriver. If there is a problem with the drive, it becomes a little more complicated, but this is rather rare. We have bikes with completely problem-free 20,000 km on the road and Bosch is quite accommodating when things get serious. As a Bosch specialist dealer, we can usually carry out the software updates or the occasional reading and rectification of errors quickly and without long waiting times using the appropriate diagnostic tools and devices.

We would not want to get involved in an ideological fundamental debate now. The production of the batteries is resource and energy consuming, the disposal is controversial at times. There are really meaningful studies on electric cars, which are rather discouraging. The question of the type of electricity generation is also relevant.But a pedelec is not an electric car

Therefore, we are firmly convinced that, even if questions are allowed, the e-bike must be assessed positively from an ecological point of view.